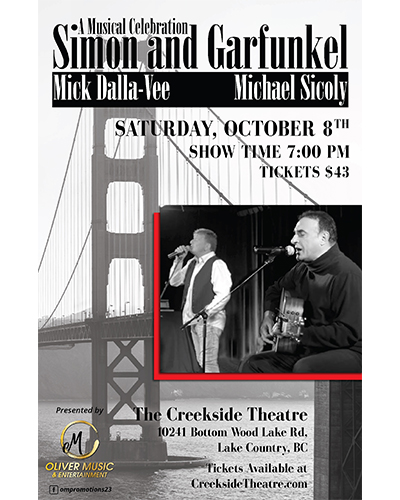 Simon & Garfunkel - A Musical Celebration has been touring worldwide for the past three years! Using huge projection photos and original footage, they perform all the hits including ‘Mrs. Robinson’, ‘Cecilia’, Bridge Over Troubled Water’, ‘Homeward Bound’ and many more.

The immersive concert-style theatre show chronicles the amazing journey shared by the folk-rock duo, Paul Simon and Art Garfunkel. It tells the story from their humble beginnings as Tom & Jerry to their incredible success as one of the best-selling music groups of the ‘60’s to their dramatic split in 1970. With more than 100 million album sales since 1965, Simon & Garfunkel’s perfect harmonies and songs that poignantly captured the times made them one of the most successful folk-rock duos of all time.

Mick Dalla-Vee and Michael Sicoly are two wonderfully talented artists with some awesome credits to their names. Their musical and vocal skills perfectly capture the sound of Paul Simon and Art Garfunkel in this beautifully crafted musical presentation.

Mick Dalla-Vee is a musician with a long and storied career in the Canadian music industry most notably for his work with Bachman & Turner for whom he has played bass and been lead singer for over 20 years.

Michael Sicoly, highly regarded vocalist, has performed on most of the world’s biggest stages. And also happens to be the anthem singer for both The Seahawks and The Mariners and has performed at many of pro sports biggest moments. He has a host of acting credits from a host of movie, TV and radio work.