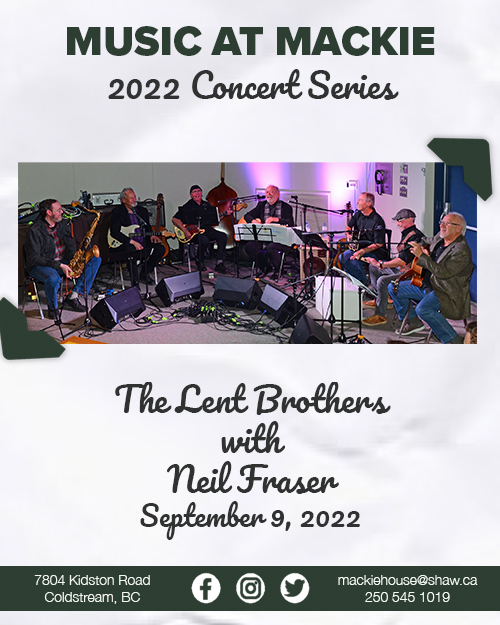 The Lent Brothers with Neil Fraser

For the final performance of the Mackie Lake House 2022 Summer Concert Series, come spend an evening of incredible and versatile music with the four Lent Brothers: John, Harry, Michael and Tim. They will be joined for this performance by Neil Fraser.

Harry Lent is a virtuoso singer-songwriter who has been performing folk, blues, and rhythm and blues music in Alberta and British Columbia for almost fifty years; Michael Lent is a nationally recognized jazz bassist who has played with everyone in the scene from PJ Perry, to Tommy Banks to Ted Quinlan to Chip Taylor, Audrey Ochoa; Tim Lent is famous in the Country Western scene in Western Canada as one of the best drummers and back-up vocalists going.

Neil Fraser is a legend in the Okanagan as one of the most genre-bending guitarists & composers in jazz, folk, rhythm and blues, and has performed for over 25 years in THE LENT/FRASER/WALL TRIO and as a key instrumentalist for so many other artists. John Lent has sung and performed as a singer in professional groups and as a single performer for over 50 years. He and Harry Lent performed as a duo in British Columbia in the early 70s and still perform as a duo.

This will be a unique and powerful commingling of performers. Each of the five performers has recorded extensively over the years, but has rarely had the opportunity to perform together like this.

Mi Taqueria Mexican Cantina will be the food truck on site for this event.

Buy a package to secure your spot at each of the Music at Mackie concerts for the 2022 season. Packages are $200 and include one free beverage per show.