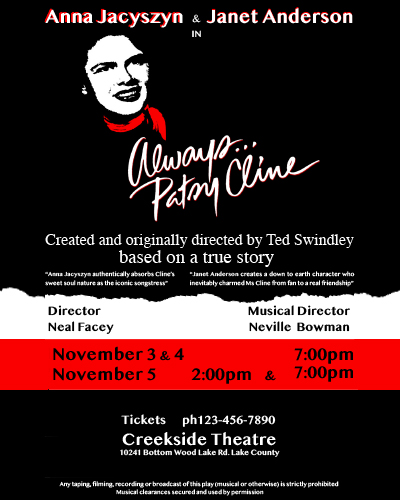 $45 Per Person (Includes fees and charges)

This is not just a tribute concert to the legendary country singer who died tragically in a plane crash in 1963, but a show based on a true friendship between Ms. Cline and a fan from Houston named Louise Seger, who befriended the star in a Texas honky-tonk in l961 and continued corresponding with Cline until her death. The musical play, complete with down home country humour true emotion and even some audience participation, includes many of Patsy’s unforgettable hits such as “Crazy,” “Walkin’ After Midnight,” “Your Cheatin’ Heart,” “You Belong to Me,” “True Love” “Just a Closer Walk With Thee…27 irresistible songs in all! The show’s title was inspired by Cline’s letters to Seger, which were consistently signed “Love ALWAYS… Patsy Cline.”

This good-natured honest comedy has "crowd-pleasing" stamped all over it, and with just two lead performers, a small band, and the built-in appeal of the Cline Country Classics, you will inevitably be tapping your toes and twitching in your seats to hit after hit. The dialogue will have you in stitches with all the cheeky banter leading to sentimental tears and back again. Anna Jacyszyn authentically imbibes her character revealing the sweet nature and soul of this iconic songster, while Anderson creates a no-fuss down to earth character who inevitably charmed Ms. Cline from fan to real friend.