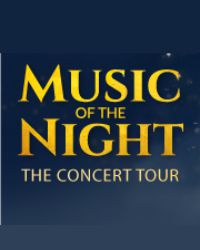 Music of the Night: The Concert Tour

× “Music of the Night: The Concert Tour” to hit Vancouver Island, Salt Spring and Whistler this June Local and International artists will delight as they celebrate Andrew Lloyd Webber’s 70th Birthday with performances of some of the most iconic pieces of musical theatre ever written Vancouver, BC: Music of the Night – The Concert Tour, is a concert celebration of Andrew Lloyd Webber's 70th Birthday and his acclaim as the most successful musical theatre composer of all time. With a first tour leg launching later this month, audiences in Chilliwack, Kamloops, Cranbrook, Creston, Nelson, Trail, Grand Forks, Oliver, Penticton, Kelowna, Vernon will have the unique opportunity to hear performances of some of the most iconic musical theatre scores ever written. Repertoire will include selections from Phantom of the Opera, Evita, Cats, Jesus Christ Superstar, Sunset Blvd, and more!

The artistic team and performers behind these iconic musical theatre masterpieces are theatre professionals with impressive credentials. Alan Corbishley’s banner of Sound the Alarm: Music/Theatre brings the creative vision and artistic leadership to this project. Renowned Canadian music impresario Frederik Robert will serve as musical director on this project. Robert toured across Canada with the Canadian Tenors and Romanza Tenors, and is delighted to return to these communities as Music of the Night’s musical director.

The cast is comprised of both musical theatre veterans and emerging artists. Baritone and Vancouver Island native Zander Felton is one of the province’s most promising young theatre artists and musicians. Zander is “excited to further his musical learning along side a handful of experienced professionals and share the power and passion crafted by Andrew Lloyd Webber through music” with his fellow Islanders and British Columbians.

Soprano Melina Schein and Tenor Nic Kyle are both familiar with the stage and the works of Andrew Lloyd Webber. Schein is a New York native, now residing in the Okanagan, who has numerous Broadway and Off-Broadway credits, including Phantom of the Opera. Kyle is an internationally acclaimed tenor who has performed extensively through London's West End and played Jesus in Jesus Christ Superstar in Australia and New Zealand Tours.

Under this acclaimed creative team, The Music of the Night will provide a audiences why Andrew Lloyd Webber is the musical phenomenon he is known to be.