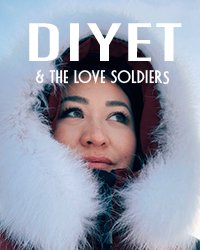 Diyet & The Love Soldiers are alternative country, folk, roots and traditional with catchy melodies and stories deeply rooted in Diyet’s Indigenous world view and northern life. Her songs are an interpretation of a northern reality: hard, raw and will break you if it can but at the same time, always beautiful, gentle, strange and intensely alive.

Over the last decade, the group has performed nationally in Canada and internationally in Europe. They have three albums: The Breaking Point, When You Were King, and their third, self-titled album Diyet & The Love Soldiers which earned nominations for Folk Album of The Year at The Indigenous Music Awards and Indigenous Artist of The Year at the Western Canadian Music Awards. Diyet received the Canadian Folk Music Award for Indigenous Songwriter of the Year in 2020.

Diyet & The Love Soldiers perform in an intimate OnSTAGE Concert with the audience seated directly on the stage. Don't wait - seating is limited.