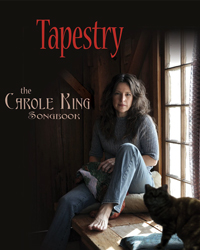 × Over her long career, Carole King has recorded more than 25 solo albums, including TAPESTRY, which topped the U.S. album charts for 15 weeks in 1971, and remained on the charts for more than six years. Her numerous hits include “You’ve Got a Friend,” ‘I feel the Earth Move,” “It’s Too Late,” and “Beautiful” the title of the current mega-hit Broadway musical about the life and times of one of America’s most prolific, honoured and revered singer-songwriters.

Tapestry: A tribute to Carole King re-creates the glorious sound of a Carole King concert, bringing you a fantastic live performance of all the great music she’s written and recorded to date.

Tapestry is the Premier musical tribute to Carole King, and you will be transported back to the iconic image of her multi-selling album of 1971. Impeccable attention to detail is taken in recreating a respectful and accurate presentation of piano and vocals, just as they were. Suzanne’s performance will take you on a journey back to those great recordings. During the 70’s and 80’s, Carole played solo with acoustic musicians and also with a full band. Tapestry is done with a full compliment of musicians, and not only presents the record-breaking, Grammy winning album of the same name, but is a retrospective of the iconic song writing team of Goffin and King, and all her major hits. This prolific team also wrote chart-topping hits for artists such as Aretha Franklin, Bobby Vee, The Beatles, James Taylor, the Drifters and many more.

What do people say about Tapestry: The musical tribute to Carole King? Eugene Rae from the Midland Cultural Centre said: "Tapestry was brilliant! With a stellar band, Suzanne brought the audience on a journey through the songbook of Carole King. This show was as close to a sure bet as you can get in the arts.”

Media Advisor for Zoomer media, Susan Holden, says, "I had the privilege of seeing Tapestry in Ontario. Suzanne’s concert does more than simply remind you of the Tapestry album. She and her fabulous cast of musicians go a step further and recreate the essence and era of Carole King’s album.”

Anne from Waterloo Ontario— “It was fabulous—and Suzanne sounded just like Carole King! I love the Tapestry album, and yes I would recommend this show to everyone."

Tapestry, the Musical tribute to Carole King will be appearing at the Vernon Performing Arts centre on May 27th, 2020. Tickets will go on sale to the general public on Friday December 6th and will be available at the box office, online at www.ticketseller.ca, or by phone at 250-549-7469… All seats are reserved and priced at $52.25.

Don’t miss TAPESTRY... The Musical tribute to Carole King Live in Vernon at the Performing Arts Centre this coming May.

Tapestry is another presentation of the Kootenay Concert Connection.