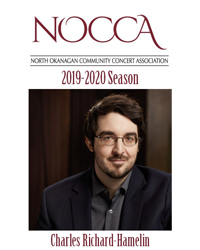 × Silver medalist and laureate of the Krystian Zimerman Prize at the 2015 International Chopin Piano Competition in Warsaw, Canadian pianist Charles Richard-Hamelin is standing out today as one of the most important musicians of his generation. In 2014, he also won the second prize at the Concours Musical International de Montréal and the third prize at the Seoul International Music Competition in South Korea. Charles is the recipient of the Order of Arts and Letters of Quebec and the prestigious Career Development Award offered by the Women’s Musical Club of Toronto.

His first solo recording, which features late works by Chopin, was released in September 2015 on the Analekta label and received widespread acclaim from critics throughout the world (Diapason, BBC Music Magazine, Le Devoir) as well as a Felix Award (ADISQ). A second album recorded live at the Palais Montcalm in Quebec City with music by Beethoven, Enescu and Chopin, was released in the fall of 2016 and also had a very positive welcome (Gramophone, La Presse, The WholeNote). The first volume of the complete Beethoven violin sonatas with Andrew Wan, concertmaster of the OSM, was released in the fall of 2018 and his next projects include both Chopin Concertos with the Montréal Symphony Orchestra and Maestro Kent Nagano.